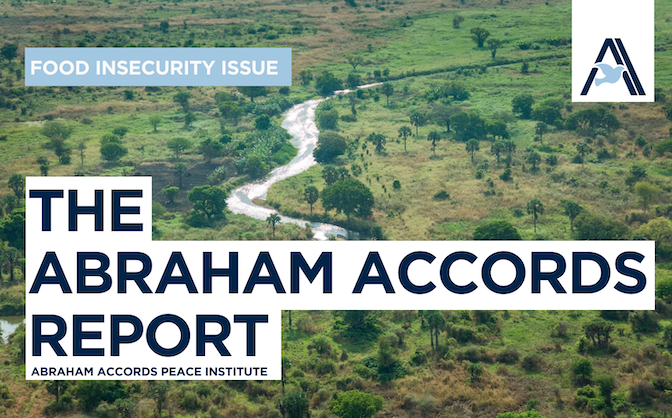 November 2022 was an unusually busy month for the Abraham Accords. On the diplomatic front, Israel’s President Isaac Herzog met with Egyptian President Abdel Fattah el-Sissi, UAE President Sheikh Mohammed bin Zayed Al Nahyan and Foreign Minister Sheikh Abdullah bin Zayed Al Nahyan, Prince Moulay Rachid of Morocco, and Jordan’s King Abdullah. Additionally, presumptive incoming Prime Minister Benjamin Netanyahu spoke with the leaders of the majority of Accords countries. On the commercial front, Israel and Bahrain successfully completed the first round of talks on a free trade agreement and MOUs were signed in the water, green hydrogen, research and innovation fields, among others. An event celebrating the second anniversary of the Accords was held in the United Kingdom, attended by the United Kingdom’s new Prime Minister Rishi Sunak. On the cultural front, Morocco became the first-ever Muslim country to inaugurate a synagogue at one of its universities, and a memorial event for the Kristallnacht pogrom was held for the first time ever in the United Arab Emirates.

The Abraham Accords Peace Institute (AAPI) made significant headway on several initiatives as well. Among other activities, a team from AAPI, together with partners from the Moroccan OCP and the World Food Program, traveled to Sudan and took part in site visits in order to advance AAPI’s joint agricultural venture, aimed at enhancing food security and strengthening the Accords. Former Chancellor of Austria, Sebastian Kurz, joined AAPI’s Honorary Advisory Council.

Below you can find a timeline of notable Abraham Accords-related events that occurred in the month of November 2022:

November 1, 2022: Morocco became the first-ever Muslim country to inaugurate a synagogue at one of its universities. The synagogue is located at Mohammed VI Polytechnic University in Marrakesh alongside a mosque as a symbol of religious tolerance.

November 2, 2022: At an event in London organized by the UK Abraham Accords Group, ELNET UK, and the British Jewish Board of Deputies that celebrated the second anniversary of the Abraham Accords, British PM Rishi Sunak expressed the UK’s strong commitment to strengthening and deepening the Accords. Per Sunak: The Abraham Accords represent one of the “greatest achievements in the long process of securing peace in the Middle East…..Today we send a clear message about our commitment to the Accords and all that they represent.” The event was attended by ministers, senior officials, ambassadors from the Abraham Accords countries, British MPs, and Jewish leaders.

November 4-6, 2022: A medical conference at a Jewish museum in Essaouira, Morocco brought together local cancer specialists and experts from Israel.Titled “Tomorrow’s Medicine as a Bridge for Peace”, discussions among the 60 participants focused on hopes that the 2020 normalization between Israel and Morocco would spur greater medical cooperation.

November 5, 2022: Sheikh Khalid bin Ahmed Al Khalifa, diplomatic advisor to the King of Bahrain, reaffirmed that the Abraham Accords bind the nations together and transcends partisan politics following the Israeli election on November 2nd. “We have an agreement with Israel, part of the Abraham Accords, and we will stick to our agreement and we expect it to continue in the same line and continue building our partnership together,” he told reporters.

November 7, 2022: The International University of Rabat and Israel Aerospace Industries (IAI) signed an agreement to exchange experiences and enhance cooperation in scientific research and innovation.

November 8, 2022: Israel and Jordan signed a memorandum of understanding to move ahead with the water-for-energy Prosperity Blue + Green agreement, after an initial examination of the project found it to be feasible. The deal, first announced in November 2020, is for Jordan to build 600 megawatts of solar power capacity that would be exported to Israel. In parallel, Israel would provide water-scarce Jordan with 200 million cubic meters (mcm) of desalinated water.

November 8, 2022: Israel’s Foreign Ministry announced that hundreds of top gaming stars from around the world, including participants from Abraham Accords countries, will arrive in Israel early next year for a one-of-its-kind electronic sports tournament.

November 8, 2022: The first UK chief rabbi to ever visit the Emirates spoke in front of Islamic scholars and leaders at the Abu Dhabi Peace Forum, and was welcomed to the Forum by its president, Sheikh Abdullah Bin Bayyah, a revered Islamic scholar. During his remarks, Chief Rabbi Mirvis hailed the Abraham Accords for making this unprecedented development possible, and called on leaders to build on the historic peace that the Abraham Accords have brought about.

November 9, 2022: A memorial event marking the Kristallnacht pogrom was held for the first time ever in the United Arab Emirates. Holocaust survivor Eve Kugler, 91, delivered the keynote address. She became the seventh Holocaust survivor to be brought to the UAE to speak about the Holocaust since the signing of the Accords. The UAE’s Education Ministry is working with Yad Vashem to incorporate education about the Holocaust in to elementary and high school curriculums.

November 9, 2022: The Emirates’ Center for Strategic Studies and Research (ECSSR) in Abu Dhabi hosted a symposium on the results of the recent Israeli elections and the implications for the region. The conference, the first in an Arab state to feature so many Arab and Israeli speakers discussing internal Israeli affairs, was attended by many senior officials, as well as by the first Emirati ambassador to Israel and the Israeli ambassador to the UAE.

November 9-11, 2022: For the first time, Israeli companies, including Israeli Aerospace Industries and Rafael, exhibited their products in the first-ever Israeli pavilion at the Bahrain International Air Show.

November 10, 2022: UAE President and Crown Prince Sheikh Mohammed bin Zayed called Likud leader Benjamin Netanyahu to congratulate him on his election victory the previous week and to invite him to the United Arab Emirates.

November 10, 2022: In yet another indication of how the Abraham Accords have led to a trend towards normalization between Israel and its Arab neighbors, a deal was reached for direct flights between Ben Gurion airport and Hamad international airport in Qatar during the 2022 FIFA World Cup.

November 10, 2022: For the first time in history, a high-ranking Israeli Air Force commander visited the Kingdom of Bahrain to take part in a conference of international air force commanders.

November 10, 2022: The Embassy of the UAE in London held a screening of the award-winning documentary Amen-Amen-Amen. The documentary tells the story of the gifting of a Torah scroll by the Jewish community of the UAE to UAE’s current President Mohamed bin Zayed, dedicated in memory of the late Sheikh Zayed bin Sultan.

November 14, 2022: Sudanese leader Gen. Abdel Fattah al-Burhan sent a letter to Netanyahu expressing a desire to “continue the cooperation between us to advance ties in all fields for the benefit of citizens in both countries.”

November 14, 2022: University of Haifa signed a first-of-its-kind trilateral collaboration agreement with United Arab Emirates University and the Germany-based GEOMAR Helmholtz Centre for Ocean Research Kiel to investigate the consequences of climate change and pollution in the Eastern Mediterranean Sea and the Arabian Gulf. Signed at the 2022 United Nations Climate Change Conference (COP27), the Memorandum of Understanding is the first step towards a five-year research initiative in which the three institutions will ultimately develop mitigation strategies for the deterioration of marine ecosystems in the region.

November 15-16, 2022: Israel-headquartered global venture firm OurCrowd announced that it would be expanding its existing operations in the UAE with a venture capital (VC) office in Abu Dhabi and an artificial intelligence (AI) tech hub as part of a new agreement. One day prior, Israeli fintech company Liquidity Group announced it had signed a deal to open an R&D center in the UAE. OurCrowd and Liquidity are taking part in a $545 million Abu Dhabi government incentive program launched in 2020 through the Abu Dhabi Investment Office (ADIO), that offers financial and non-financial incentives for global companies to expand their operations in Abu Dhabi.

November 16-17, 2022: The Jerusalem Post and its media partners Global Media Holdings in Morocco and the Khaleej Times in the United Arab Emirates hosted the Global Investment Forum in Marrakech.

November 17, 2022: Israel’s Environmental Protection Minister and Jordan’s Water and Irrigation Minister signed a declaration of intent to partner in the ecological rehabilitation and sustainable development of the Jordan River, the first environmental agreement between Israel and Jordan since their 1994 peace treaty.

November 17, 2022: Morocco’s National Office for Electricity and Drinking Water (ONEE) and Israel’s national water company Mekorot signed a Memorandum of Understanding (MOU) to establish a framework for the development of cooperation between the two institutions in the areas of drinking water and liquid sanitation. The agreement will enable the two companies to work together to promote joint cooperation activities in the fields of seawater desalination, performance improvement, water sanitation, digital systems management, R&D and innovation.

November 17, 2022: The first Israeli passport for an Israeli baby born in the United Arab Emirates was issued by the Embassy of Israel in Abu Dhabi.

November 17, 2022: The office of Israeli President Isaac Herzog announced that Herzog will visit Bahrain on December 4th, becoming the first Israeli president to visit Bahrain. On December 5, the president will depart Bahrain for the United Arab Emirates where he will attend the Abu Dhabi Space Debate and meet with UAE President Sheikh Mohammed bin Zayed Al Nahyan -- the fourth meeting between the two leaders.

November 18, 2022: In another indication of how the Abraham Accords have led to stronger diplomatic ties between Israel and countries in the region, the Azerbaijani parliament approved a historic motion proposing to open the first embassy of a Shiite-majority state in Israel.

November 21, 2022: Israel’s Ministry of Economy and Industry announced that Israel and Bahrain have successfully completed the first round of talks on a free trade agreement.

November 24, 2022: The UAE-Israel Business Council, together with EBN & Co and other Israeli and Emirati law firms, held an event celebrating two years to the Abraham Accords, which was addressed by UK Ambassador to Israel Neil Wigan OBE. Wigan affirmed the UK’s commitment to actively supporting the deepening of the Accords.

November 28, 2022: A delegation from the Habima National Theater is set to perform a popular musical, “Spanish Orchard,” in Morocco’s capital of Rabat, making it the first ever performance of the Israeli group in a Muslim country.