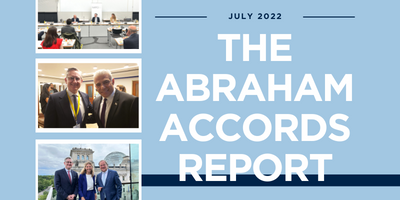 July saw a number of highly-important developments for the Abraham Accords. US President Biden visited the region, and in a joint declaration with Israeli Prime Minister Lapid, stated that the United States is “committed to continue playing an active role…to deepen the ties between Israel and all of its regional partners, to advance Israel’s regional integration over time, and to expand the circle of peace to include ever more Arab and Muslim States.” Following his visit in Israel, President Biden took the first direct flight by a US President from Israel to Saudi Arabia, while Saudi Arabia announced it would be opening its airspace for the first time to all carriers, including Israeli airlines flying to destinations in the East.

AAPI President and Executive Director Robert Greenway traveled to the EU, Germany and Israel, meeting senior government officials, ministers, diplomats, private sector companies and civil society actors, to discuss opportunities for strengthening the Abraham Accords. These meetings focused on strategic multilateral initiatives aimed at leveraging cooperation among Accords members in order to solve urgent global challenges in fields such as trade, energy, food security and sustainable development. In addition, AAPI discussed with key leader’s steps to overcome obstacles to the development of Abraham Accords ties, and shared the Institute’s unique research on the progress of relations among Accords member nations.

These meetings, as well as partner feedback received from across the Middle East and beyond, clearly highlighted the importance of the Abraham Accords not only for the Accords’ member nations, but for the US, European and Asian markets at whose crossroads they sit. As we approach the two-year anniversary of the Accords, AAPI will continue to work with all international stakeholders to realize the full potential of the Accords for both the region and the world.

Below you can find a timeline of notable Abraham Accords-related events that occurred in the month of June 2022:

July 21, 2022-The Jewish community in the UAE continues to expand since the signing of the Abraham Accords, according to reports.

July 21, 2022-Bahraini Crown Prince and Prime Minister Salman bin Hamad Al Khalifa congratulated Prime Minister Yair Lapid on assuming the role of prime minister during a phone call. During the call, Lapid stressed that Bahrain is an important and valued ally in the Middle East, and the two discussed increasing cooperation between the two countries in various fields.

July 19, 2022- Cooperation between the foreign ministries of Israel and the United Arab Emirates on a shared database that would link Israeli and Emirati companies seeking agriculture, water, communications, and digital ventures in Africa was reported.

July 13-16, 2022- During his visit to the region, President Biden flew directly from Israel to Saudi Arabia, becoming the first U.S. President to do so. Concurrently, Saudi Arabia announced that it would open its airspace to all air carriers, paving the way for more overflights to and from Israel, in a change that will reduce travel time and flight costs for many such flights. Additionally, Israel agreed to the withdrawal of an observer force from two Red Sea Islands, paving the way for their transfer from Egypt to Saudi Arabia.

July 14, 2022- Moroccan King HM Mohammed VI officially recognized the country’s Jewish community as a component of national culture, in a statement by the Royal Palace. Following “royal instruction,” Moroccan Interior Minister Abdelouafi Laftit proposed in a meeting of the Council of Ministers in Rabat that new representative bodies be formed for the Jewish community, calling their traditions “a component of the rich Moroccan culture.”

July 14, 2022-The leaders of India, Israel, the United Arab Emirates, and the United States, met for the first time as part of the “I2U2” group, and agreed to work together on food security and clean energy, tech, and trade, among other issues. In a joint-statement released after the meeting, the parties expressed their support for the Abraham Accords: “We reaffirm our support for the Abraham Accords and other peace and normalization arrangements with Israel.  We welcome the economic opportunities that flow from these historic developments, including for the advancement of economic cooperation in the Middle East and South Asia, and in particular for the promotion of sustainable investment amongst the I2U2 partners. We also welcome other new groupings of countries, such as the Negev Forum for regional cooperation, that recognize the unique contributions of each partner country, including Israel’s ability to serve as an innovation hub connecting new partners and hemispheres to strategically address challenges that are too great for any one country to manage alone.”

July 14, 2022-During a press conference in Israel, President Biden emphasized his strong support for the Abraham Accords. “We will also continue building on the Abraham Accords, which I strongly support because they deepen Israel’s integration into the broader region and establish lasting ties for business, cooperation and tourism.” A Joint Declaration signed that day by President Biden and Prime Minister Lapid stated the following: “Israel thanks the United States for its ongoing and extensive support for deepening and broadening the historic Abraham Accords. The countries affirm that Israel’s peace and normalization agreements with the United Arab Emirates, Bahrain, and Morocco constitute a critical addition to Israel’s strategic peace treaties with Egypt and Jordan, all of which are important to the future of the Middle East region and to the cause of regional security, prosperity, and peace. The countries note that the historic Negev Summit, initiated and hosted by Prime Minister Lapid, was a landmark event in joint U.S.-Israeli efforts to build a new regional framework that is changing the face of the Middle East. The United States and Israel welcome in this regard the meeting held in Manama, Bahrain on June 27th, forming the Negev Forum on regional cooperation. The United States welcomes these developments and is committed to continue playing an active role, including in the context of President Biden’s upcoming visit to Saudi Arabia, in building a robust regional architecture; to deepen the ties between Israel and all of its regional partners; to advance Israel’s regional integration over time; and to expand the circle of peace to include ever more Arab and Muslim States.”

July 13, 2022- Kahn-Sagol-Maccabi (KSM), the research and innovation center of Israel's Maccabi Healthcare Services, and UAE health organizations, signed a series of comprehensive strategic agreements to promote joint medical research and technological innovation. The agreements focus on promoting medical research that combines big data capabilities, and genetic and clinical research, with the goal of advancing personalized medicine while emphasizing medical innovation and the establishment of a regional ecosystem that will support joint research activities. Studies will be conducted in cancer, cardiovascular disease, diabetes and more.

July 11, 2022- 24 representatives from Bahrain, Israel and Germany were invited to Berlin by the German Foreign Ministry for a week of exchange meant to encourage dialogue in line with the Abraham Accords. Among the participants were students, doctors, journalists and accountants

July 8, 2022-A Saudi religious leader, known for visiting Auschwitz and for his involvement in interfaith dialogue, gave the main sermon at the height of the annual hajj pilgrimage at the Nimrah Mosque on Mount Arafat outside Mecca. The decision to give the honor to Sheikh Dr. Mohammed bin Abdul Karim al-Issa, the head of the Muslim World League, was seen by many as “a significant signal” from Saudi Arabia.

July 7, 2022- UAE President Sheikh Muhammad bin Zayed Al Nahyan called Israeli Prime Minister Yair Lapid to congratulate him on taking office, while Lapid sent his best wishes to the UAE President on the occasion of Eid al-Adha. The two leaders reaffirmed that it is crucial to continue to strengthen people-to-people relations, as well as tourism and economic partnerships between the countries. They also spoke of the need to expand the circle of the Abraham Accords to other countries in the region.

July 6, 2022-Israeli Defense Minister Benny Gantz revealed Israeli defense and military officials have held more than 150 meetings with regional allies and signed defense deals worth more than $3 billion since the signing of the Abraham Accords.

July 4-12, 2022- AAPI’s President and Executive Director travelled to France and Germany, where he met with members of the European Parliament and the German Bundestag to share the progress of the Abraham Accords and discuss ways that Europe and Accords countries can take advantage of the opportunities created by the Accords to address shared regional challenges such as food and energy security. Afterwards, Mr. Greenway traveled to Israel to meet with key ministers, officials, private sector actors and civil society organizations to discuss Accords-related initiatives and opportunities, in the lead-up to President Biden’s visit to the region.

July 3, 2022- Islamic scholar Abdallah bin Bayyah, a faith leader from Abu Dhabi, participated in a historic meeting at the House of Lords in London to discuss a shared vision for peace and tolerance with Rabbi Ephraim Mirvis, 11th Chief Rabbi of the United Congregations of the Commonwealth.