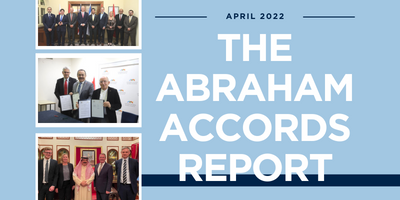 The month of April featured a rare convergence of the religious holidays of Ramadan, Passover, and Easter and provided an occasion for members of all three Abrahamic religions for deep reflection. It also provided an opportunity to reflect on the continued deepening of relationships made possible by the Abraham Accords. In this month’s newsletter, the focus will be on continued deepening of trade relations between Abraham Accords countries.

The year 2021 featured a dramatic increase in the depth and breadth of trade between Abraham Accords signatories. The first quarter of the year 2022 has seen that momentum pick up further. (Source: Israel Central Bureau of Statistics)

Read below for a list of notable developments that occurred amongst Abraham Accords signatories during the month of April 2022.

April 28, 2022- The Israel Institute of Technology Technion and Morocco’s Mohammed VI Polytechnic University (UM6P) announced the signing of an agreement to promote academic cooperation between the two institutions.

April 27- 2022- A special ceremony in Dubai hosted by the Crossroads of Civilizations Museum and the Jewish Community of the UAE commemorated Yom Hashoah. Additionally, the Embassy of Israel in Abu Dhabi hosted a special webinar in commemoration of Holocaust Remembrance Day.

April 26-29, 2022- Sharaka lead a delegation of young leaders from Lebanon, Syria, and Gulf countries to Poland for the March of the Living and to visit Auschwitz in order to strengthen the bond between Israel and the Arab world following the Abraham Accords and to increase awareness of the truth of the Holocaust to the Arab world.

April 26, 2022- The award-winning documentary film “Amen”, which tells the story of the first new Jewish community in the Arab world in centuries and the dedication of a specially-made Torah scroll presented to Abu Dhabi Crown Prince Sheikh Mohamed bin Zayed Al Nahyan made its Israel premier.

April 25, 2022- Israel’s Minister of Defense hosted a celebratory Iftar dinner with the Ambassadors to Israel of Morocco, Bahrain, the United Arab Emirates, Egypt, and the United States.

April 17, 2022- The first flight on a new direct route between Israel and the Egyptian coastal resort of Sharm el-Sheikh departed from Ben Gurion Airport

April 15-23, 2022- Passover was celebrated across the region, with the largest seders in the history of the Arab world being celebrated in the UAE.

April 15, 2022- The senior rabbi of the Jewish Council of the Emirates in the UAE announced plans to develop the Gulf Cooperation Council’s first dedicated Jewish neighborhood, which will include a synagogue, homes, schools, a community center, and hotels.

April 14, 2022- The award-winning film Finding Abraham, which followed young Emiratis, Bahrainis, Moroccans, and Egyptians on their first visit to Israel. was released.

April 14, 2022- The University of Haifa and the Bahrain-based King Hamad Global Centre for Peaceful Coexistence signed a Memorandum of Understanding (MoU) to promote coexistence between Jews and Arabs in the Middle East.

April 10, 2022- Esawi Frej, the Israeli Minister for Regional Cooperation became the first Israeli minister to visit Kosovo, where he met with the prime minister and the foreign minister. Before his historic visit, Minister Frej, alongside Kosovar Ambassador to Israel Ines Demiri, met with two Kosovar children in Israel receiving life-saving health care.

April 7, 2022- An agreement between Israel and Morocco regarding the exemption of visas for holders of diplomatic and official passports was announced.

April 6, 2022-AAPI’s Executive Director Robert Greenway spoke at the World Affairs Council and AJC’s International Perspectives Series on the Abraham Accords and their impact on the Middle East region.

April 4-7, 2022- The UK Abraham Accords Group, chaired by the Rt Hon Dr Liam Fox MP, visited Bahrain and met the King of Bahrain, the Crown Prince and Prime Minister, as well as other government ministers.

April 3-6, 2022- Israel’s Kornit Fashion Week Tel Aviv 2022 featured an exhibition of 30 styles by Emirati designer Mona El Mansouri in honor of normalized relations between the United Arab Emirates and Israel. The event was also attended by journalists from Bahrain.

April 3, 2022- Israel and the United Arab Emirates signed an agreement to boost maritime cooperation that will enhance the safe passage of ships, develop maritime trade, facilitate the exchange of experiences, and protect the marine environment.

April 1, 2022- On the personal invitation of HM King Hamad bin Isa Al Khalifa of Bahrain, two Israelis visited Bahrain and met with King Hamad, where they presented him with a peace sculpture to thank him for his role in the Abraham Accords.