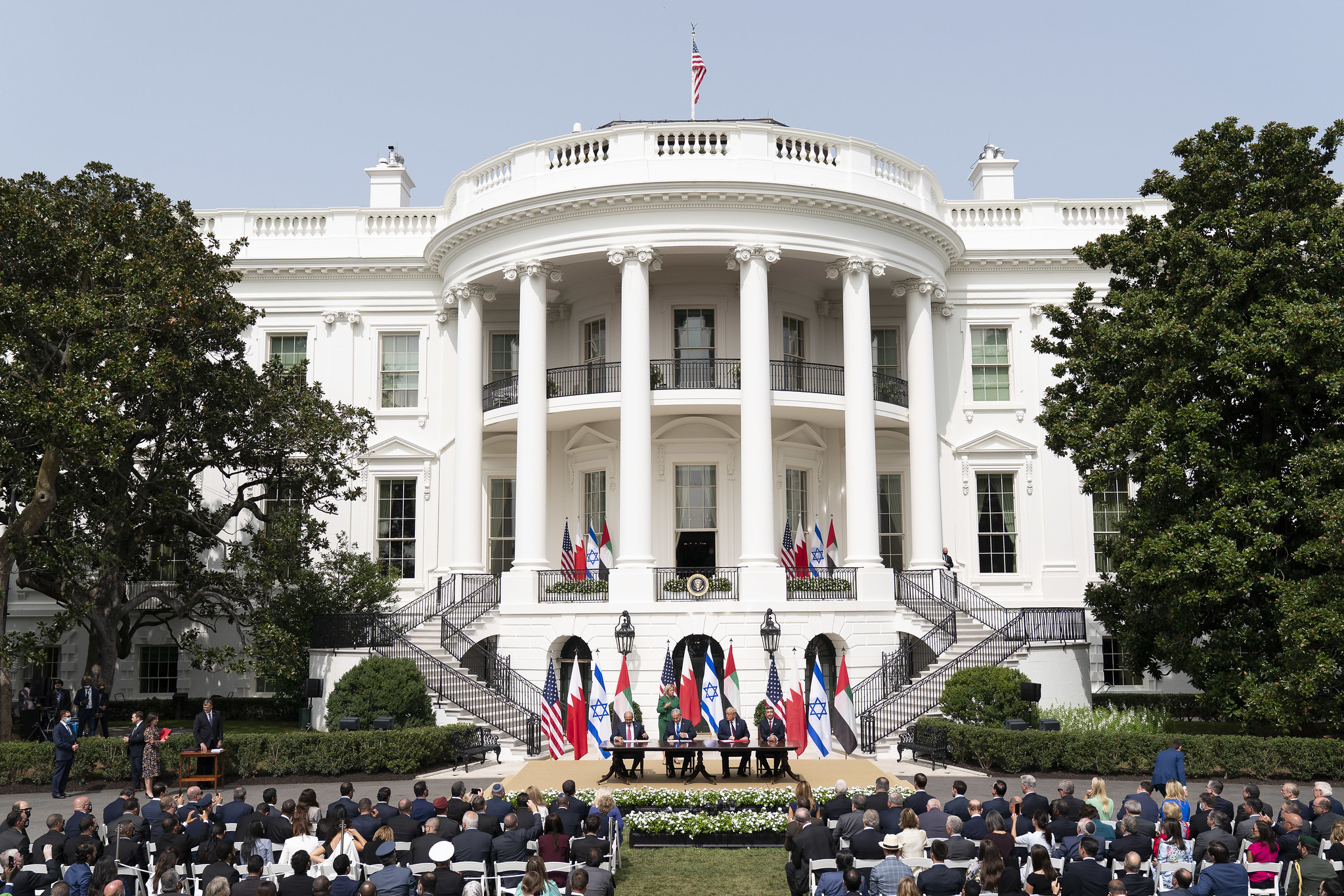 September 15 marks the two-year anniversary of the signing of the Abraham Accords in Washington DC. While the first year since the signing saw numerous historic developments, in the second year of the Accords relations between Israel and its neighbors have deepened significantly. There has rightfully been significant attention on historic visits, the opening of embassies, and blossoming trade relations, but here, we list five insights, beyond the headlines, to know about the Abraham Accords on their second anniversary:

#1: The Abraham Accords benefit from bipartisan support in both the United States and in Israel.

Support for the Abraham Accords is one of the few things that unites both sides in a deeply divided Washington. In January 2022, the bipartisan, bicameral U.S. Congressional Abraham Accords Caucus was launched. The Caucus' co-chairs are Senators James Lankford (R-OK), Jacky Rosen (D-NV), Joni Ernst (R-IA) and Cory Booker (D-NJ), and Representatives Cathy McMorris Rodgers (R-WA), David Trone (D-MD), Ann Wagner (R-MO) and Brad Schneider (D-IL). Despite the Abraham Accords being a signature foreign policy achievement of his predecessor President Donald Trump, in July, President Joe Biden emphasized his strong support for the Abraham Accords. He stated that “we will also continue building on the Abraham Accords, which I strongly support because they deepen Israel’s integration into the broader region and establish lasting ties for business, cooperation and tourism.”

Meanwhile, in Israel, the coalition led by Naftali Bennett and Yair Lapid that succeeded Prime Minister Netanyahu fully embraced the Abraham Accords and dedicated themselves to strengthening relations with the Accords countries. In October 2021, the Knesset Abraham Accords Caucus was launched, co-chaired by coalition member Ruth Wasserman Lande and member of the opposition Ofir Akunis. The ceremony to launch the caucus was attended by Mr. Lapid and Benny Gantz of the coalition as well as opposition leader Netanyahu.

#2: The impact of the Abraham Accords has improved Israel's relationship with its neighbors.

The impact of the Abraham Accords have extended far beyond the Accords signatory countries, as Israel’s relations with many of its non-Accords neighbors have also improved significantly in the last year. While Israel and Egypt already had diplomatic relations, the signing of the Abraham Accords has led to a deepening relationship. Egypt’s President Abdul Fattah al-Sisi hosted Israeli Prime Minister Naftali Bennett and Abu Dhabi Crown Prince Mohammed bin Zayed for an unprecedented trilateral summit in Egypt's Sharm el-Sheikh. Trade relations have soared, with the two countries targeting $700 million in annual bilateral trade by 2025. Further, the amount of travel between the countries has increased significantly, with thousands of Israelis visiting Sinai and multiple airlines launching flights between Israel and the Egyptian coastal resort of Sharm el-Sheikh.

Likewise, while Israel and Jordan already had diplomatic relations, the signing of the Abraham Accords has led to an improvement in the relationship with landmark meetings occurring on a more frequent basis, and historic multilateral trade agreements being signed.As part of the larger process of regional integration set in motion by the Abraham Accords, in August Israel and Turkey announced the return to full normalization of relations, including reinstating ambassadors and consuls-general. In July 2022, Saudi Arabia announced that it would open its airspace to all air carriers and Israel agreed to the withdrawal of an observer force from two Red Sea Islands, paving the way for their transfer from Egypt to Saudi Arabia.

While the growth in bilateral ties between Israel and its regional neighbors has been impressive, the true transformative potential of the Accords is in strategic multilateral initiatives linking Abraham Accords members and other Middle East countries with the US, European, and Asian markets at whose crossroads they sit. One area where this transformative potential can have a far-reaching impact to meet pressing needs is in the field of energy. In June 2022, the EU, Egypt and Israel agreed to significantly increase the export of Israeli gas to Europe via Egypt, providing the EU with a reliable alternative to Russian gas, while reinforcing Egypt-Israel economic cooperation. This agreement is a harbinger of future energy collaboration through frameworks such as the East Mediterranean Gas Forum. Expanding the overland Israel-GCC trade route, connecting Europe with Asia, can greatly reduce the time and cost of shipping perishables across the region, thereby enhancing food security and political stability.

Countries enjoying the benefits of win-win economic cooperation are motivated to defend it against outside threats. Two years after their signing, the Abraham Accords can help provide solutions to the most pressing challenges facing the international community, while ensuring peace and stability at the crossroads of US, European and Asian Markets.

#4: Israel and the Gulf are more integrated into the region from a security perspective.

One of the numerous ways the Abraham Accords will continue to improve Middle East stability is the contribution to the integration of security relations between Israel and its regional neighbors. In November 2021, the United States, United Arab Emirates, Israel and Bahrain conducted the first publicly announced joint naval exercise between the four countries in the Red Sea. In November 2021, Israel Defense Minister Benny Gantz visited Morocco and signed a landmark security agreement. In February 2022, Minister Benny Gantz visited Bahrain where he met with senior officials including H.M. King Hamad bin Isa bin Salman Al Khalifa and signed a historic security cooperation agreement. One result of this agreement is that an Israeli Navy officer will be permanently stationed in Bahrain, representing the first time an IDF officer is stationed in an Arab state. In March, during the first official visit by the IDF to Morocco, senior IDF officers met with senior officers of Morocco’s military and signed an MOU to expand military cooperation. Israel’s Defense Ministry announced that three Israeli military observers took part in exercises in Morocco in July 2022, the first time that Israeli military observers participated in a drill in Morocco. The “African Lion 2022” exercise followed a Moroccan counter-terrorism unit’s participation in a multinational drill in Israel the previous week.

In the last year, Jewish communities in the Accords countries have grown and prospered in previously unimaginable ways. Passover was celebrated across the region, with the largest seders in the history of the Arab world being celebrated in the UAE. In January, Holocaust Remembrance day was observed within Bahrain, UAE, and for the first time ever in Egypt. Kosher restaurants and Judaica stores have opened, Jewish cemeteries have been restored and renovated, and agreements to promote religious coexistence have been signed. In April, the senior rabbi of the Jewish Council of the Emirates in the UAE announced plans to develop the Gulf Cooperation Council’s first dedicated Jewish neighborhood, which will include a synagogue, homes, schools, a community center, and hotels. In July, Morocco’s King officially recognized the Jewish community as part of Morocco’s national culture.